Another Presumed Chandeleur Gull in Indiana

Chandeleur Gull (pronounced "shan-de-loor") is the name given to hybrids of Kelp & Herring origin. The name originates from Louisiana's Chandeleur Islands in the Gulf of Mexico. It is here that the two species were first detected together in the summer of 1989; Interbreeding took place for at least 15 years and the result was a medley of hybrids and backcrosses that were documented by Dittmann and Cardiff.

The "Chandeleur Gull" was somewhat short-lived as multiple hurricanes soon rendered the islands less and less suitable for nesting. The small Kelp and Herring population that was apparently thriving here in the late 1990s was ultimately displaced and seemed to disappear from the radar after Hurricane Katrina. There is currently no known site where the two are interbreeding - not a single pair to speak of.

It seems natural to assume that the pure Kelps and pure Herrings from the Chandeleur Islands went on to unite with colonies of their respective conspecifics. But is it possible that some went on to further hybridize? And what about the hybrid offspring? Surely some must have favored an association with their Kelp parents while others with their Herring progenitors.

The Lake Michigan Saga
Very little information is known regarding the whereabouts of the hybrid offspring. Interestingly though, there have been multiple sightings of presumed Chandeleur Gulls on the Indiana (LaPorte County) and Michigan (Berrien County) lakefront in recent years. The first such record was an individual with a leg band in the winter of 2004 at Michigan City Harbor (Brock & Cassady 2011). Definitive data on the bird's origins was not obtained. Additional sightings between IN an MI of individuals without leg bands took place in 2006, 2009, 2010, 2011, 2012 and 2013; It is not clear if these records represent distinct individuals or just one or two reoccurring birds. The dates range from mid-Fall through late Winter - none during the breeding season.

This season's presumed Chandeleur Gull was first spotted at the end of September by Jeff McCoy, again in Michigan City. Photos began to circulate and gave the impression of a possibly darker bird than previous years. A few days later Brendan Grube and I spotted it on the beach at Michigan City immediately after a series of heavy rain storms. Conditions were mostly overcast and the bird's feathers were drying off.


Here is the description I've recorded in eBird: 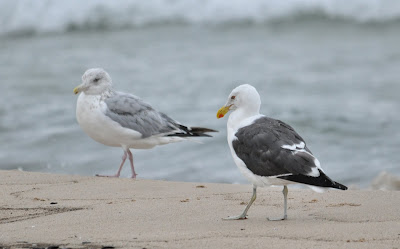 As a clarification, the bird is without doubt about the same size as a typical Herring. I believe it "appeared" larger than the surrounding Herrings mostly due to its habit of standing upright with neck outstretched. Its longer legs should also be considered. Its build was not very robust, but rather, somewhat refined and sleek. Incidentally, Michigan birder Matthew Hysell describes a similar impression of a suspected Chandeleur Gull from a few years ago in Berrien County, MI.

The Plot Thickens
For me, the most interesting thing about this season's bird is that it appears to be a near-adult. The relatively small mirror on P10, black subterminal markings on the outer webs of P1-P3, and black subterminal markings to the greater primary coverts all point away from a definitive adult (see Figure 8 in Dittmann and Cardiff for a similar looking specimen). 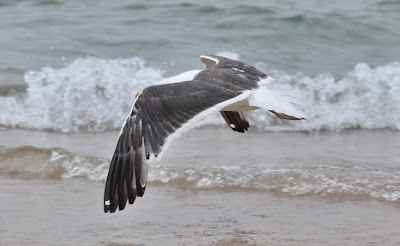 What I'm implying here is that this individual is very likely NOT a product of the "Chandeleur Islands". To give contrary thought benefit of doubt, let's assume it's completing its 6th prebasic molt: that would mean it was born in the breeding season of 2008 (three years after Hurricane Katrina). 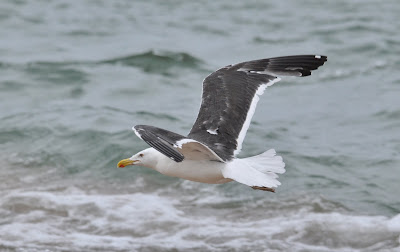 Thoughts on Genetic Make-up
An important question to ask is, "Are we dealing with an F1 hybrid?". It seems remarkably darker than expected for a first generation hybrid. I'm basing this off of the description given by Dittmann and Cardiff where they liken the upperpart coloration of F1s to Laughing Gull and Yellow-footed Gull. My assessment was 'notably darker than Laughing' and 'more like intermedius Lesser Black-backed' (which averages slightly darker upperparts than Yellow-footed).

The phenotype invariably shows a strong Kelp influence and my favored opinion is that it resembles a Kelp x F1 hybrid. Of these F2 types, Dittmann and Cardiff noted:

"A Kelp x F1 hybrid is almost as dark-mantled as a Kelp Gull (and may even fall within the normal range of mantle variation for Kelp), and it may be tempting to identify it as a Kelp. A known (banded) Kelp x F1 hybrid observed in 2004 appeared very Kelp-like, but it showed some contrast between the mantle and wing-tip -- the only character (other than the leg band) separating this bird from a Kelp".

Indeed, there is the occasional Kelp Gull that shows a similar contrast where the upperparts appear a shade or two paler than the wingtips, as this bird (see the included sources at the end of this post). I asked Alvaro Jaramillo to weigh in on my photos and he showed some reservation due to the dull leg color coupled with the paler upperparts. Incidentally, he was in Chile seeing hundreds of Kelps at the time. His thoughts were that it may or may not be a Kelp, but that it didn't match what he was currently seeing.

Identification
Birders, particularly along the Gulf Coast and in Central America, should be on the lookout for these Chandeleur types. It goes without saying that every dark-backed gull in this region should be carefully scrutinized (even sub-adults).

The species most likely to cause confusion is the rapidly increasing Lesser Black-backed (especially in the West Indies). It's important to note that a large Lesser Black-backed could match the size of a smaller Chandeleur type, but the resemblance is somewhat superficial. Bill size and structure should clarify matters when in question.The latter should have a stouter bill and wider gonydeal expansion. Lesser Black-backed may average a shallower chest and narrower wings (best seen in flight). Wingtip pattern should also be compared (see Figure 4 in Dittmann and Cardiff). Finally, the legs are long on Chandeleurs, and more importantly, the color on adults should be duller than LBBG. Note the olive-gray coloration that shows a greenish blend of yellow. This color may be brighter in the breeding season. 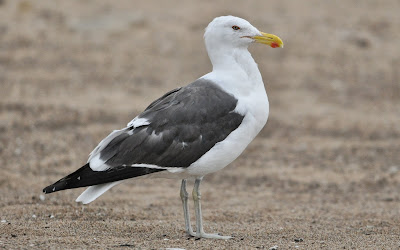 Another hybrid that should be eliminated is Great-blacked x Herring; This pairing should show pink legs along with larger mirrors on P10 (and even P9). Compared to Chandeleur, the bill on GBBG x HERG is expected to be more compact. The eye also appears more beady.

Final Thoughts
Could it be that Kelps and Herrings are back at it again? A new colony sprouting up right under our nose is very conceivable as both species continue to expand their ranges (Herring southward and Kelp northward). There have been a number of reports of these hybrid types in recent years along the Gulf Coast, including several from Alabama's Dauphin Island (outside of the breeding season). This doesn't come as a huge surprise given the proximity to the Chandeleur Islands (some 50 miles away). Most intriguing are the reports by Marshall Iliff from October 2010 (an apparent 1st cycle and 3rd cycle F2 hybrid). Several other observers have also reported these presumed hybrids from Dauphin Island in 2011, 2012 and 2013.

An overwhelming number of offshore sites exist in the Gulf of Mexico and the Caribbean Sea where Kelp Gull and Herring Gull can easily converge. It may be that the two species continued to hybridize on a much smaller scale after Hurricane Katrina, or, were already hybridizing on different islands during the Chandeleur years. There's always the exciting possibility of Kelp Gull establishing a footing in North America and independently breeding here on its own! But for now, birders should be on the hunt for a new Chandeleur hybrid "settlement".