We often see Peregrine Falcons buzzing flocks of gulls and then half-heartedly aborting and changing their intent for reasons unknown to us. Yesterday while wedged between two large boulders on the Manitowoc lakefront, I patiently sat for almost 3 hours admiring a few Little Gulls in a sizable feeding flock of 500+ Bonaparte's Gulls. Suddenly, ALL of the birds took to the air and headed east over the lake in unison. The birds moved with such urgency that I knew the only predator that can elicit such fear is a Peregrine Falcon. Not wanting to be discovered, I remained still and didn't raise my gaze. A few seconds later the falcon zipped right past me, some 75 feet out, and snatched a 1st cycle bird in midair as it tried to gain altitude. I had a fleeting thought it might be a Little Gull, but that wasn't the case.

Carrying its catch back to the nest...

But before it can get very far, an adult Herring Gull interfered and began scolding and harassing the falcon: 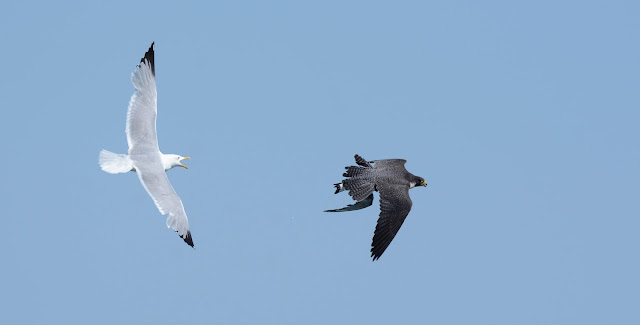 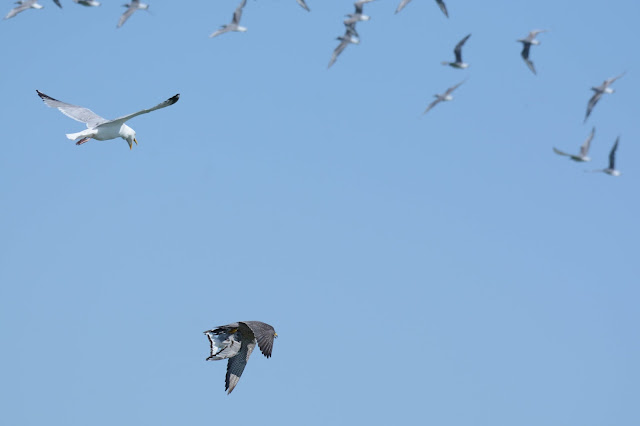 I've seen gulls do this with eagles and hawks, but I've never encountered a gull with the courage to chide a Peregrine. I suppose the falcon isn't much of a threat if it has its talons full! The Herring persisted and "tailed" the adult Peregrine for about 10 seconds when a second falcon appeared and thwarted the gull. The Herring, knowing what formidable predator it was facing, never dared to fly directly in front of or below either falcon. 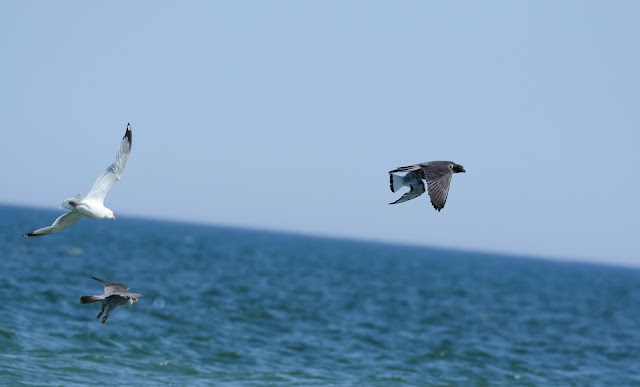 The only thing scarier than a Peregrine Falcon is two PEFAs! Both of these birds have metal bands on both legs and nest on a nearby tower.

I hung out near the impoundment for a few more hours hoping the gulls would return as they usually do. Alas, they continued to feed over the lake, far out to the north and never did return while I was there.

Fortunately, the falcons didn't catch what many of us would consider a "better" bird, for lack of a better word (like this Ross's Gull earlier this year in California). There are other migratory birds here that could easily fall into the talons of these so-called "fighter jets of the avian world". You just never know!