A day trip to Kenosha County, Wisconsin yesterday was rewarded with this adult Slaty-backed Gull.


I found it at Lake Andrea around 1:00 pm after having spent the last 4.5 hours there, working a growing flock of Herring Gulls. The flock wasn't too shabby to begin with, giving up 11 Iceland
Gulls (7 thayeri, 3 kumlieni and 1 thayeri-kumlieni type), 3 Lesser Black-backeds and a Glaucous.


It flew in from the northeast, and I have to say, I sort of impressed myself with the split-second ID that took place with its first pass. Oddly, I was a little nonplussed and thought, "Oh, another Slaty-backed. I need to call someone. Dang, now I have to take off my gloves".

This is my second self-found in 3 years and 9th Slaty-backed "tick" between Wisconsin, Illinois, Indiana and Michigan since I got involved in this gull thing. To put some of this in perspective, I've seen just about as many California Gulls down here as I have Slaty-backed Gulls. Further, I can confidently say that Slaty-backed Gull is more common on Lake Michigan than Mew and Glaucous-winged Gull combined. Bizarre but true.

For the most part, the species is more likely to be detected on southern Lake Michigan after New Years, so this individual is a tad early - the earliest one I've seen yet.


Several local birders hustled out to see the bird and weren't disappointed. It stuck around for several hours and occasionally got up and circled near us. 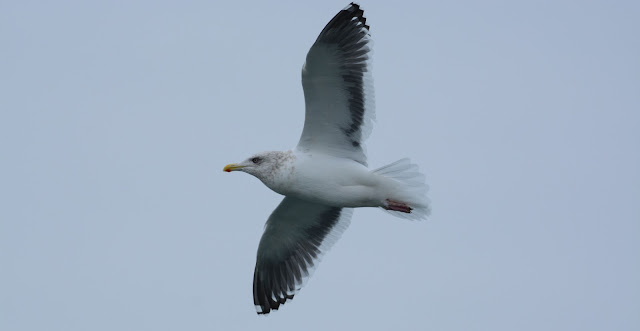 Surely a season highlight, and one that'll hopefully settle down in our region for the winter!
at December 11, 2017
Email ThisBlogThis!Share to TwitterShare to FacebookShare to Pinterest
Newer Post Older Post Home