The Yellow-footed Gull at The Salton Sea

In the United States, the only reliable location for Yellow-footed Gull (L. livens) is the Salton Sea in southeastern California. Here, there is a sizable post-breeding dispersal from the Gulf of California, usually beginning in late May to early June, and peaking in late July to early August. Peak numbers can be anywhere from 100-300 individuals of varying ages, with adults slightly predominating. Numbers start to gradually decrease through the fall with only a handful lingering through the winter (particularly, at the southeast unit of the sea). By the time the CBC rolls around, birders must really put in an effort to find 1 or 2 individuals hanging around Obsidian Butte. Wintering individuals are usually first-year birds.

The Yellow-footed Gull was once considered conspecific with the Western Gull (L. occidentalis). When looking at the aggregation of differences among YFGU and WEGU one begins to wonder how these two taxa were ever treated as the same species. James Audubon is responsible for originally making this classification and both Ridgway and Dwight perpetuated the idea, agreeing that Western Gull has a northern form and a southern form -- the southern form being L. o. livens. This classification was made solely on the fact that these two are the only large gulls with dark mantles on the west coast. It is however important to add that Yellow-footed Gull has never been known to occur regularly on the Pacific Coast of California. There are only a handful of records along California’s coast. With regards to the Pacific, Yellow-footed Gull only occurs at the very southern end of Baja California’s coast. In other words, the two are geographically isolated and there is no record of interbreeding; Audubon, Ridgeway and even Dwight were unaware of this isolation in ranges.

Alan Brooks was among the first to question this grouping with his paper, “What Color are the Feet of the Western Gull?". In 1982, 60 years after Brooks' paper, the AOU split the two after Pierre Devillers demonstrated that Yellow-footed acquires definitive plumage in 3 cycles and Western in 4 cycles. In addition, the differences in leg color, voice and nest site preferences clearly warranted a split. The Yellow-footed Gull has a much more lower pitched voice when compared to the almost yelling high pitched tones of Western Gull. Also, Yellow-footed prefers to nest parallel to the tide line on beaches whereas Western prefers higher elevations. I tried to play devil's advocate and found examples from modern day classifications where accepted subspecies are known to show some of these variations.

According to Olsen and Larsson, the nominate race of Lesser Black-backed Gull, Larus fuscus fuscus, is a "three-year gull" whereas L.f intermedius and L.f graellsii are "four-year gulls".  With regard to leg color, a sizable percentage of the East Baltic race of European Herring Gull (L argentatus) has yellow legs as opposed to the the pinkish legs of  the western race. Also, various races of the Herring Gull complex exhibit noticeably different voices. Although unlike WEGU and YFGU, the two races of Herring Gull commonly interbreed when they come in contact. Judith Hand argued that the two, Western and Yellow-footed, have environments that "differ radically" and that although there is no reason to believe the two would not interbreed if they came in contact, how successful such interbreeding might be is another question (Hand, 1981). Hand's statement makes sense considering WEGU and YFGU nest at differing elevations with colonies that are clustered versus linear, respectively. She also argued that interbreeding is certainly not enough to warrant a lumping of any sort, giving the example of L.glaucescens and L.occidentalis.

Having found examples of current gull classifications of where molt cycles, leg color and voice vary among subspecies, I've come to my own conclusion that Devillers' research was not "the" determining factor that brought about the split, but rather, it was the aggregation of differences that many ornithologists had been pointing out since almost immediately after the classification was made by Audubon. Although I'm sure Devillers' work was the straw that broke the camel's back.

I spent a couple days birding the Salton Sea earlier this month (August, 2010). Most of the birds I observed were in heavy molt but I did have the opportunity to observe the various ages of YFGU. I made it a point to spend time observing plenty of Western Gulls along the coast before and after my Salton Sea visit. As I was getting out of my car and changing into my mud boots, I heard an interesting vocalization from the beach that I had never heard before. The only gulls on the beach, as it appeared, were Yellow-footed, California, Ring-billed and Laughing. Having heard the latter three before today, I suspected that the voice I was hearing was that of Yellow-footed. The voice was very distinct: deep, low pitched and somewhat eerie. Indeed, it was an adult Yellow-footed Gull -- ruler of the beach!

Adults are easily separated from Western Gull by leg color. Although, on two occasions during my visit, I watched adult Yellow-footeds fly away with their legs dangling under their tails. The shadow from their tails obscured the yellow color on the feet and legs, resulting in what both Guy McCaskie and I swore was pink. We realized this was a lighting effect playing tricks on our eyes.

What if the birds are sitting or in the water? There have been more and more isolated sightings of Western Gulls at the Salton Sea. This could make for a great ID challenge. Consider the two birds below: 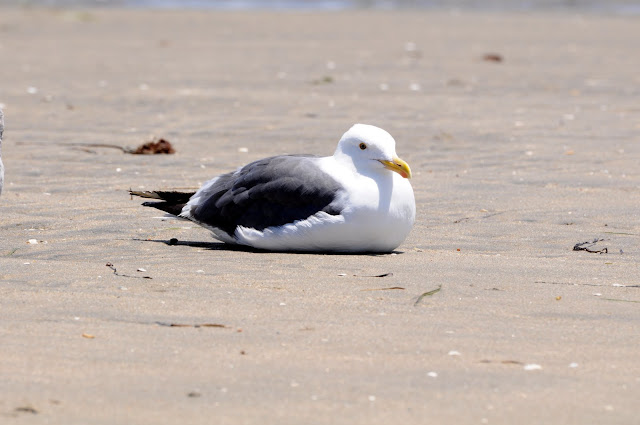 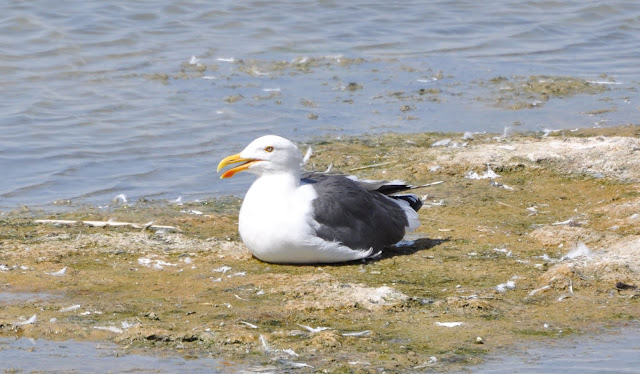 The top bird is a Western photographed in San Diego and the bottom bird is aYellow-footed photographed at the Salton Sea on the same day.

What is more of a challenge is telling apart the younger-aged individuals. When looking at first cycle birds, notice that Yellow-footed has paler underparts and an obvious white patch on parts of the belly: 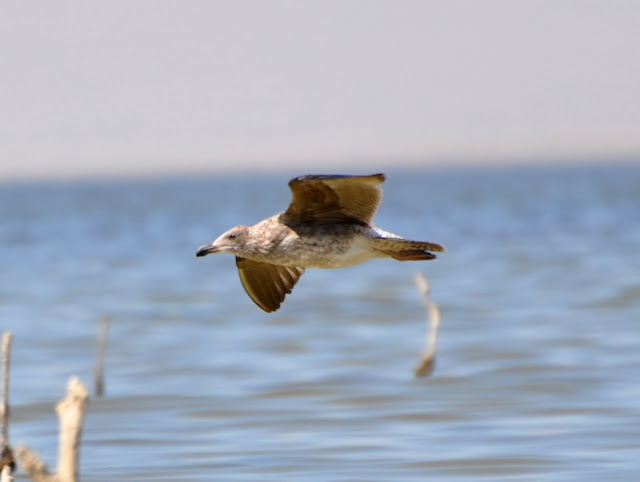 This is very different than a 1st cycle Western that has an overall much darker, chocolate-brown aspect:

A nice mark on 2nd cycle Yellow-footeds is the almost complete lack of barring on the upper-tail coverts. Usually a solid black tailband is distinctive: 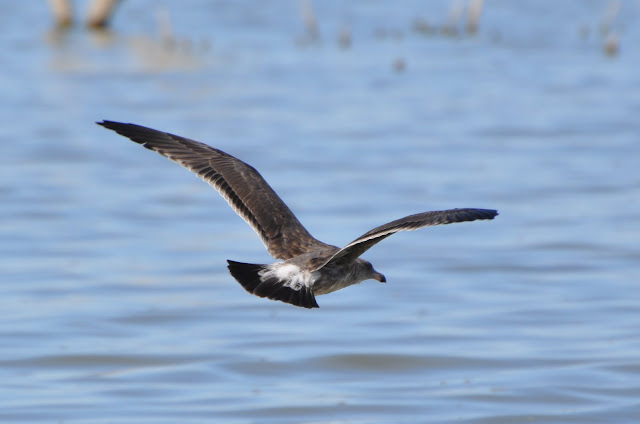 Younger Westerns are typically found with heavy markings and barring on the undertail coverts -- at least much heavier than a typical juvenile or first cycle Yellow-footed: 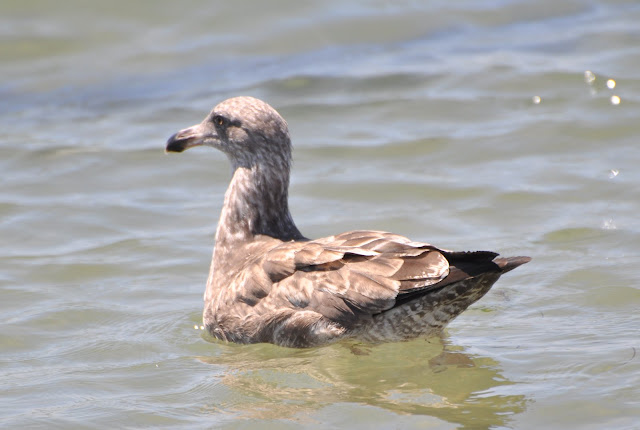 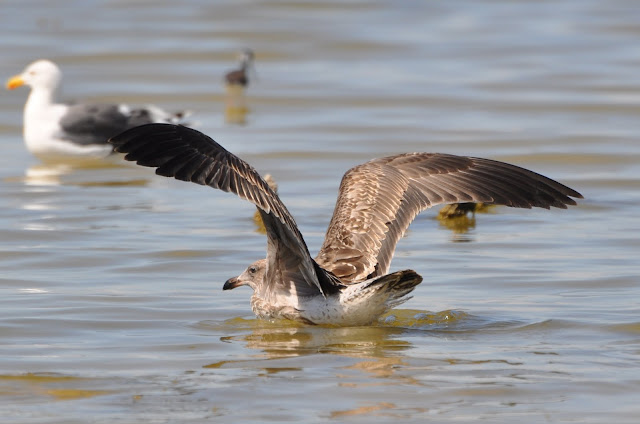 Some will say that Yellow-footed is generally a bigger bird with a heavier bill when compared to Western. This is true, but when considering age/sex differences, I feel these are not helpful ID points. Something else to keep in mind is that subadults do sound similar. It is mainly in adults that a voice difference becomes noticeable.

The Salton Sea can be an incredibly grueling place to bird and is not meant for the faint of heart. I had the pleasure of birding the Sea with the godfather of California birding, Guy McCaskie, who is unquestionably the authority on avian life here. Much of the information in this writing came from Guy per. comm. He was very clear about making sure to have lots of water and a full tank of gas when I came back to bird the sea on my own. He also pointed out some areas where he explicitly said, "You see that muck? Don't go near it or you'll end up neck-deep in it before you know it". I spent hours here on my own and I have to say there is a somewhat eerie feeling to birding here. I'm not sure if it was all of the dead snags, the 110+ degree temps I had been hearing about for months or the Horse-flys that bombard you as soon as you get out of your car: 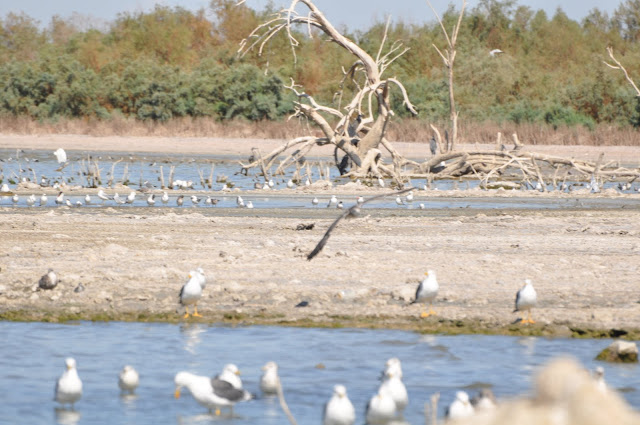 Perhaps it was the scare I got when I spent about 2 minutes in quicksand, having to surrender my New Balance gym shoes. I thought for sure I was toast!!! Those were maybe the longest 2 minutes of my life. I wiggled my way out and tried not to panic while sweat dripped from every pore of my body. Guy's words of being "neck-deep" somehow reemerged in my memory only after I started sinking. The terrian looks completely traversable and then suddenly you begin to go down in what feels like muddy sand. It's said that if you don't see footprints or tire tracks before you, then don't go any further.

During one of my visits at the Sea, I spent about 5 hours at Obsidian Butte and never once saw or heard another human being. It was a tranquil session of just me and the birds! 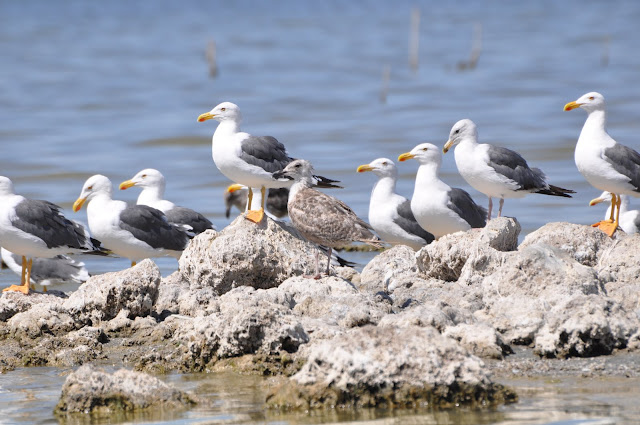 All of the gull photos in this post were taken by myself between 6-11 Aug 2010. The Western Gulls were shot at J St Marina and Camp Surf; The Yellow-footed Gulls were photographed between Red Hill and Obsidian Butte.
at August 29, 2010
Email ThisBlogThis!Share to TwitterShare to FacebookShare to Pinterest