I found this American Herring Gull at Miller Beach in Gary, IN on 22 December, 2010. 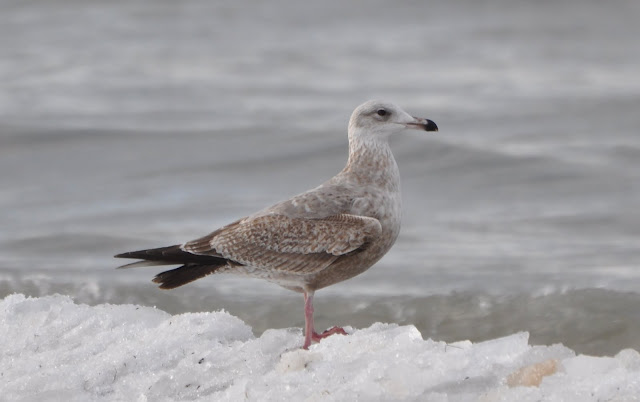 My initial impression was perhaps a delayed 2nd cycle bird because of the combination of the gray scapulars, bleached head and neck, and the pale coloration to the bill. The basal part of the bill seemed a bit too pale for a 1st cycle in December. 1st cycle Herrings usually, but not always, retain more black in the bill in the early part of the winter season; some will have the basal 2/3 of the bill completely pale with just a black tip.

The head on this bird is bleached along with parts of the neck and chest - a look that's not really expected in early winter. After a closer look at the upperwing coverts, a pattern that's much more consistent with a younger bird is revealed. 2nd cycle individuals have a finer pattern to the greater coverts or sometimes show signs of abrasion and fading. I waited a few minutes and watched it take wing. It became obvious that the flight feathers were those of a juvenile in its first molt cycle. This individual is probably no more than 6 to 7 months old. 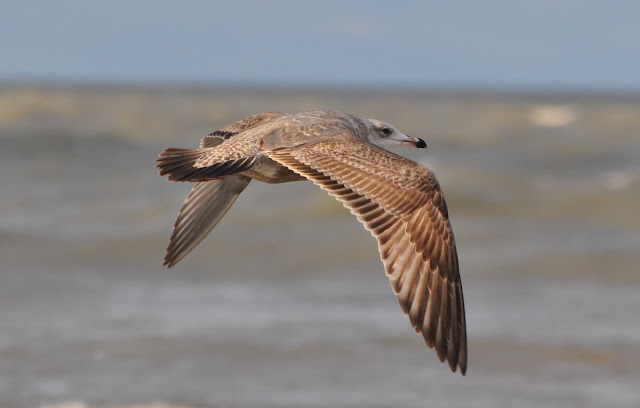 I think it's safe to say that this gull has undergone a moderate to accelerated post-juvenile molt of the scapulars, but there's still several obvious juvenile scapular feathers showing (even in the photograph of the bird standing). The head and neck area have likely whitened by bleaching but there's also the possibility that some head, neck and chest feathers are being replaced by the initiation of the 1st prealternate molt. 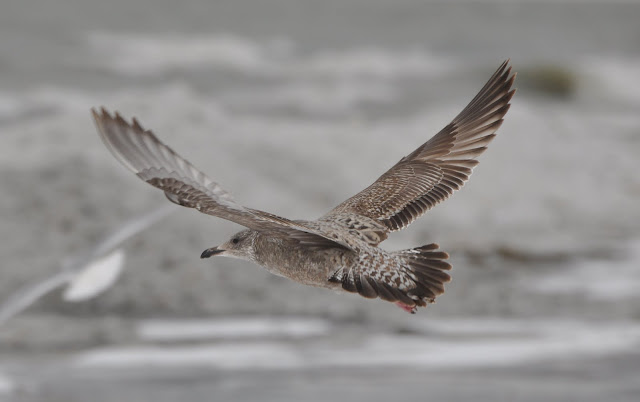 Note the almost entirely black bill that is just starting to show pale markings. The scapulars have a few new gray feathers but not predominating, and the head and neck are not bleached as the individual above. Both of these birds were photographed minutes apart at Miller Beach.

Knowing what a particular aged American Herring Gull should look like in any given month of the year is not an easy task. The variation in appearances will always offer the keen observer something worthy of pause. It's important to realize that there's an expected array of "aspects", for instance, with 1st cycles in early winter, mid-winter and late winter. Learning these limits of variation for species like Herring Gull are, in my opinion, foundational for anyone that has a serious interest in North American gulls.
at December 26, 2010
Email ThisBlogThis!Share to TwitterShare to FacebookShare to Pinterest
Newer Post Older Post Home