On Wednesday, 29 December, I headed out to the Port of Indiana in search of a pair of Black-legged Kittiwakes that had been sighted by Jeff McCoy the day before. I got to the Port and found at least one BLKI (1st c) along the outer breakwall and I was content with the distant scope views I got. I had been searching for kittiwakes for the last week or so and now the monkey was off my back.

I was already having a good day and any bird after the kittiwake would be considered a bonus. My plans were to next meet up with John Kendall at Michigan City Harbor to see if we could pick out any interesting gulls with all of the recent fish die off. When we got to Michigan City, we found that much of the beach was still covered with packed snow and there wasn't much gull activity. I spotted an adult black-backed gull swimming about 100 yards out on the lake and we subsequently spent the next 10 minutes or so trying to figure out what it might be. We were joined by a couple of birders from Massachusetts who thought it was a Lesser Black-backed Gull, but it seemed too big and chunky! We kept at it, and during our analysis, John made an interesting statement that foreshadowed what the end of our day would bring: "We just have to make sure this isn't a Slaty-backed Gull". I liked his attitude. I was impressed that he would even consider SBGU and this really speaks to the mentality of some of the Indiana lakefront birders. The bird took wing and was eventually relocated on the west side of the harbor. We agreed that it was one of the hybrids (not the putative Kelp X Herring) that was being consistently seen for the last couple of days:

Other than the hybrid which sat at a distance in terrible lighting, we found a Long-tailed Duck (fm) and a young Great Black-backed Gull (1st c). We called it quits and proceeded to head home. About 10 minutes later, John called me back to tell me that Jeff McCoy and Michael Topp just called and that they have a "probable" Slaty-backed Gull at Calumet Park. The only details he had is that it was drifting east towards Hammond Marina. I set my GPS for Calumet Park and got in "Indy-500 mode". I immediately called Greg Neise to get the word out and he did. The Illinois Birders' Forum was updated within 20 minutes of Jeff McCoy's phone call to John Kendall.

I arrived at the ComEd power plant at approximately 3:30 p.m. and wondered whether or not those I-Zoom tolls really have the ability to average my speeds from one toll to the next. I had driven from the east end of Indiana's lakefront to the west end in less than 30 minutes. I parked, grabbed my gear and briskly walked out to the lake. The rock boulders were covered with snow, concealing an inch of ice that glazed the surface. My walk in was a long 5 minutes of mixed feelings and crazed emotions. I kept thinking about the key identification features expected on a Slaty-backed while trying to keep a solid footing. When I arrived, Jeff, Michael and John were watching a large gull flock engaged in a tight feeding frenzy directly behind the discharge at the power plant. By my estimate, there were 400-500 gulls with Herrings greatly outnumbering Ring-billeds. The vortex of the frenzy was no more than 150 yards out from where we were standing.

I stood and scanned quietly without giving any formal greetings and without even asking where the bird was. It took me less than a minute to find a dark-backed gull low over the water in the feeding frenzy. It was clustered in with Herring Gulls, flying right above the water's surface and below eye level; it didn't seem any bigger or smaller than the surrounding HERGs. The first mark that grabbed my attention was the broad trailing edge - much broader than I've ever seen on a Great Black-backed or Lesser Black-backed Gull. The flight pattern was wrong for GBBG and so was the body size. The upperpart coloration seemed different than the graellsii LBBGs I'm familiar with. My first impression was promising and I was convinced it wasn't a GBBG or LBBG. The first words to come out of my mouth were, "Hey, Jeff. I saw it! I just had it! It looks good, brother. It looks really good! Are you sure the legs are pink?" Jeff replied that he was sure the legs were pink. I then asked him if he had confirmed it - in which he replied with confidence - "Yes, it has to be a Slaty-backed".

We briefly lost the bird and I mumbled some words to Jeff: "Okay, I just...I just have to...have to scan for a dark bird!". My statement was unneccesarily obvious but these were words of encouragement for myself. I had the enthusiasam of an 11-year-old boy and I loved every second of it.

A couple of minutes later, I spotted the dark-backed gull coming right for us - much, much, closer than I was anticipating. "HERE IT IS, HERE IT IS, RIGHT HERE, RIGHT HERE, CIRCLING STRAIGHT OUT IN FRONT OF US". It had abandoned the vortex, making a wide circle that allowed views in the open at close range. Jeff and Michael were able to get on the bird as it looped around, coming within a couple hundred feet. I took a good look through my binoculars and soaked in the "string of pearls". I vividly remember a primary pattern dotted with white and a deep navy blue tinge to the blackish mantle; this is what distinguished the upperparts from LBBG for me. It was exactly like the photos I had spent countless hopeful occasions pondering over. There was no doubt in my mind that the bird was indeed a Slaty-backed Gull! 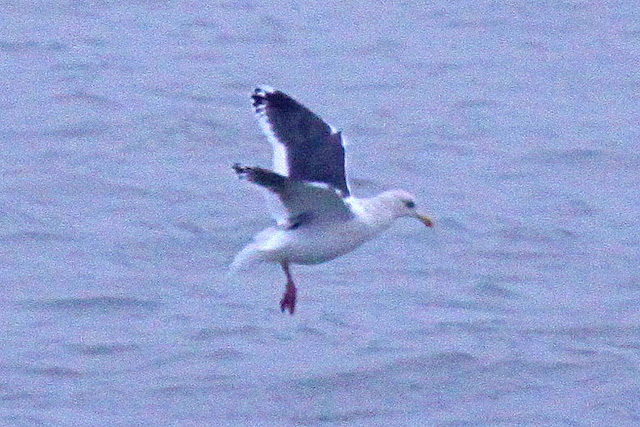 I gathered my thoughts and called Greg Neise back. I told him to scratch "probable", reassuring him that it was for sure a SBGU. I walked over to John in hopes of getting closer to the bird but we lost sight of it. Less than 10 minutes later, Jeff and Michael relocated it on the ice shelf farther back to the northeast. It was now closer to Illinois but, as far as I know, it never entered Illinois airspace. John and I walked back to get scope views. We watched it preen on the ice next to a couple of Herring Gulls at about 300 yards out. The scope views we enjoyed were fairly decent given the rate at which we were losing light: 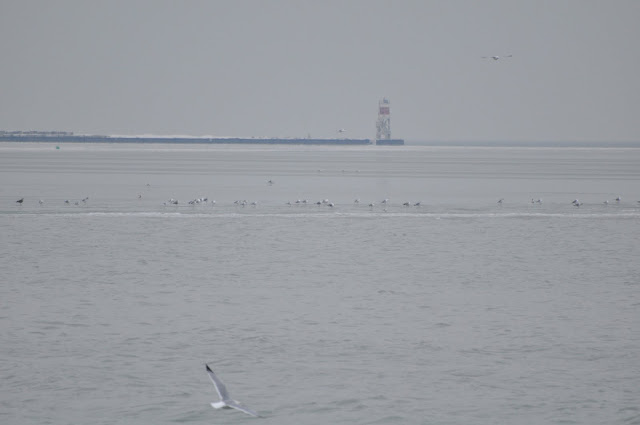 The legs were a deep pink, or at least the leg color of the surrounding Herrings gave me that impression, and it had a front-heavy look that added to the "pot-belly effect". Size was considered again and we agreed it didn't stack up to what a GBBG should next to a Herring. It looked squat and the legs seemed short. We all started discussing the possibility of a hybrid and what else it may or may not be, but we could not find a reasonable substitute. I commented that there is 1/1000 LBBGs with pink legs, but that I was sure the upperparts and the 'jizz' were not consistent with Lesser Black-backed.

Michael Topp then spotted it back in the feeding frenzy. The Herring Gulls were diving head first into the lake like terns. I can't recall ever seeing a Herring Gull plunge into the water using this diving technique. This behavior, along with the hundreds of dead fish at the discharge, led me to believe that the gulls would continue to favor this area in the immediate near future. The Slaty-backed seemed discouraged by the Herrings and soon flew out of the frenzy and landed in the water. I walked out as far as I could to try to obtain photographs. It floated along for the next 15 minutes or so and allowed nice binocular views without drifting far from the discharge. The broad tertial crescent, "mascara" surrounding the pale eye and even-sized bill were noted.

I knew the bird would be present the next day so long as there was some ice left on the lake. This bird was now Indiana's 2nd Slaty-backed Gull. I mentioned to Jeff that I wanted it for Illinois. He said, "It's going to take a lot of bread to get it over". Coincidentally, Illinois was at two records as well. Tiebreaker?

Read Day 2 here and see if this bird graced Illinois or not.
at January 01, 2011
Email ThisBlogThis!Share to TwitterShare to FacebookShare to Pinterest
Newer Post Older Post Home