An orange, 5-gallon Home Depot bucket, a pair of kneepads, three loaves of bread, a putty knife and a garbage bag - those were the "tools" that I packed in my car the night before as I brainstormed for a perfect tomorrow. I was very optimistic that the Slaty-backed would be seen in the morning. Despite my optimism, I had a couple of concerns that robbed me of a few hours of sleep: one, rain was expected through the night and so the snow on the rocks that acted as a barrier over the ice would be gone. I was sure to be very clear in my post about the risk involved with walking out on the ice. I started to have horror visions after reading John Kendall's description of this terrain: "The walk all the way to the discharge is not for most people--Be careful! The rocks at State Line Power are notoriously difficult to walk under normal conditions. Add a layer of ice and snow on top that hides slippery spots and you have potential disaster- You are walking along the edge of a 10' drop into Lake Michigan, as well". As if that wasn't enough of a concern, I also feared that the ice shelf on the lake would have certainly receded due to the rains and that meant the gulls would be farther out from shore.

I got to the power plant around 7:00 a.m. and just as I had anticipated, the melted snow now left a naked layer of ice on the rocks which made walking absolutely treacherous. Nonetheless, zealous birders were out and about. I found Jeff Skrentny, Bruce Heimer, Andy Sigler and several Indiana birders including the Grube's awaiting the gulls to come in. As predicted, the ice shelf on the lake had receded surprisingly farther than I had imagined, putting the gulls perhaps 1/2 mile out on the lake. I explained to everyone that the gulls were feeding behind the power plant the night before and so we cautiously moved south towards the discharge (the smarter birders stayed behind). I carried my bucket in one hand and my scope in the other and hoped my boots would keep me vertical. We stopped well before the fence that goes over the main discharge and we waited for at least 10 minutes before we realized that only Ring-billeds were feeding. I knew our chances of seeing the Slaty would increase as soon as the Herring Gulls came in to feed.

I took advantage of this time and walked out to the metal beams over the discharge with my bucket and putty knife. I began scraping up some of the dead fish that I noticed the night before. I filled up about 1/4 of my bucket before I noticed that it was raining - or was it? Hundreds of little concentric circles were being formed on the water's surface giving the illusion that raindrops were falling. I soon realized it was tiny fish darting in and out of the water as they came to their end. I stopped collecting dead fish to answer a call. It was Jeff Skrentny who was about 100 yards behind:  "Dave Johnson has located the Slaty-backed. He and Tom Kelly have it on the ice shelf out on the lake. It's being viewed from the Coast Guard station in Calumet Park". The Illinois birders headed to the other side (a 10 minute walk back to the cars and a 2 minute drive around to the Coast Guard station). The Indiana birders kept to their post and so did I. I had just spent the last 15 minutes slipping and sliding to get to the discharge and I wasn't ready to turn back - just not yet! I figured that the Slaty would continue to rest on the ice and that if it got up, it would come to feed at the discharge. I waited and waited and then started to fear that it could take hours for a feeding frenzy to develop. My worse fear was the 'feeding frenzy' being strictly a predusk event.

While waiting, I took a few minutes to reply to several voicemails and texts. The last text was a pivotal one sent by Jeff Skrentny: "Bring chum, we can get this bird the 100-150 yds to IL". Lightbulb!!! This is exactly what I had fancied the night before! It was now or never. Naturally, I feared getting to Calumet Park only to have the Slaty get up and come to the discharge. I had played this game with the Colorado Ross's Gull the month before and I wasn't looking forward to another cat-and-mouse game. I called Jeff Skrentny back and asked for details. He explained that the bird was still put and it looked glued to the ice. I began walking back with all of my gear, 3 loaves of bread and about 25 dead fish in my bucket. I stopped to inform the Grube's (who had no idea the bird was being seen on the other side) and I told them of my plan to go chum the bird in. They, understandably, wished me luck and kept to the power plant.

I took a good fall on the ice as I made my way back to the car. The rocks do tend to get more slippery when you walk faster :) I had to stop to gather myself. I picked up the scattered fish and bread that I dropped when slipping. I decided to walk a bit slower. I put my kneepads to use and learned to land on them thereafter. I'm sure that if some of my nonbirding friends saw me walking out over the ice they'd think I was intoxicated or just simply insane. I made it off the rocks and got to the parking lot. I ran into John Kendall who was getting ready to walk out on the rocks and I informed him of my plan. I told him 'I have to go see about a state bird'. He laughed and told me he knows how that goes, but insisted he was going to the discharge.

As I drove around Calumet Park I received a phone call from Jeff who was worried about my slight delay. I told him I had a couple of minor setbacks but that I'd be there in 2 minutes. As I was making the loop around Calumet Park, I ran into Joe Lill who had been driving in the "wrong" direction. He made a U-turn and followed me. We passed the Coast Guard station and found a host of birders lined up with scopes along the street. This was one of those gatherings where you knew a good bird was being seen simply because of the birders that were present.﻿﻿
I looked over the assemblage of birders who had been watching the gull in their scopes for the last 30 minutes or so:Walter Marcisz (IL), Bob Erickson (IL), Andy Sigler (IL), Joe Lill (IL), Terry Walsh (IN), Bruce Heimer (IL), Ken Brock (IN), Don Gorney (IN), and Michael Topp (IN) (other birders present but not in the photo: Jeff Skrentny (IL), Ryan Sanderson (IN), Mark Scheel (IN)). The distance they were viewing the bird at was despicable and unsatisfactory. There was an anxious but hopeful quality to their faces. I walked past them carrying an orange 5-gallon bucket wearing kneepads and a trooper hat. I must have looked absolutely ridiculous. It wasn't time for chatting but I did make one remark that made a lot of sense at the time: "Okay, who has the measuring tape?". One listing rule that has always struck me as silly is not being able to count a state bird if the bird isn't in that state's airspace. My personal view is that if a bird is seen from Illinois, for instance, then it should be counted. I had the bird in Indiana and now I felt like I needed to bring it home. This was an instance where I participated wholeheartedly in listing rules. It was about 9:00 a.m. and if the Slaty did decide to get up there was a big chance of it staying in Indiana airspace based on how limited Illinois waters are at this border. 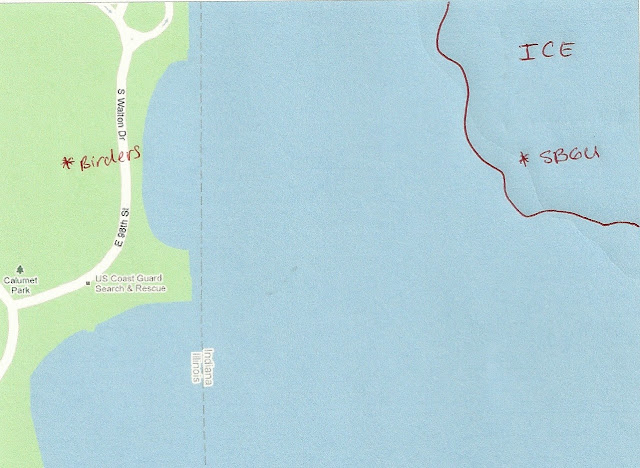 I walked down to the shore and began to chum: 1 Ring-billed Gull, 7 Ring-billeds, 20 Ring-billeds, 50 Ring-billeds... It didn't seem like any of the gulls on the ice shelf were moving but it was difficult for me to see what was happening with the naked eye. Birders began to stir a little commotion and so I thought perhaps some of the Herrings on the ice shelf were responding. I then heard the famous cheer of Bruce Heimer: "YEAAH!". I'm very familiar with this cheer and so I knew the bird was close. I got rid of all the chum and started to scan. The Ring-billeds came in like a plague and much of my view to the lake was obscured, but I was looking too far out. Birders were cheering and high-fives were being exchanged. I yelled back to the group, "Are you guys seeing it?". Someone yelled back "the second post". I looked to my right and the SLATY-BACKED GULL was standing in the open within 100 ft from me! Oh, my time to photograph...

I couldn't help but release my stored up energy. I screamed like a maniac: "ILLINOIS!!!!!!". Birders responded with more cheers and clapping! Indiana's finest, Ken Brock, gave a big smile and a cheer. It was Illiana at its best! ﻿

The chum had worked. The SBGU looked around for about 45 seconds without ever attempting to eat any bread. It got up and lazily flew back out to the ice over the lake.


I was later told that the SBGU was the only bird that got off the ice shelf and came straight in to see what the Ring-billeds were excited about - a real birding miracle!

Thanks to Jeff McCoy for finding this bird and diligently working through all of the field marks. Thanks to John Kendall for alerting me and to Dave Johnson for relocating it the next morning. Most people present earned a life bird; Illinois got a 3rd state record and a 1st Cook County record (if accepted).
at January 02, 2011
Email ThisBlogThis!Share to TwitterShare to FacebookShare to Pinterest
Newer Post Older Post Home