Last year I wrote about tertial replacement in late winter/early spring Ring-billed Gulls (1st cycles in their second calendar year). Traditionally, the literature has held that this age group seldom replaces tertials in the first plumage cycle. Interestingly, though, I found 32% of May birds (n = 194) had completely renewed tertials before dropping P1 (i.e. the onset of PB2).

After documenting these birds with photographs and a short write-up, the question then became, "Are these tertials late 1st alternate feathers, or, early 2nd basic?". Peter Pyle, who I've found to be an invaluable resource while investigating these sort of questions, suggested the newer tertials may be part of the first plumage cycle and should be considered late 1st alternate. I was pleased with this reply, but thought it was odd that some of the last feathers to be molted in a prealternate molt were technically "flight feathers". However seeing that lower scapulars are sometimes replaced in late winter/early spring, it could make sense that some tertilas (which act as coverts to the bases of the primaries on the closed wing) would need renewing via PA1 as well.

But what about hatch year (HY) RBGUs that replace tertials very early on, before the Fall season even hits?

Last weekend I photographed a very advanced HY Ring-billed Gull on Lake Michigan that showed the oddest of tertial patterns:

It's not at all the new lower tertial (T5?) that intrigues me, instead it's the 3 tertials sitting above - they have advanced, adult-like gray bases. What took place during feather-growth for this bi-colored pattern to form? I ask this rhetorically.

The tips have a juvenile pattern, but the bases look like what would be seen on 2nd generation tertials.

So I got out today in the rain and spent most of my time focusing on HY RBGU tertials. I photographed a few more interesting birds to add to this discussion. All the photos below are from 05 September 2015. Chicago, IL. 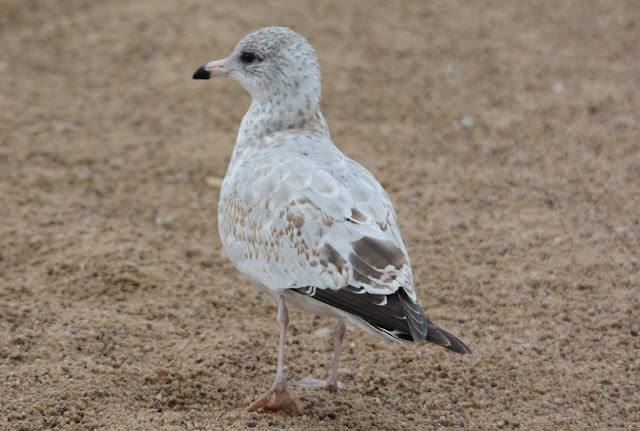 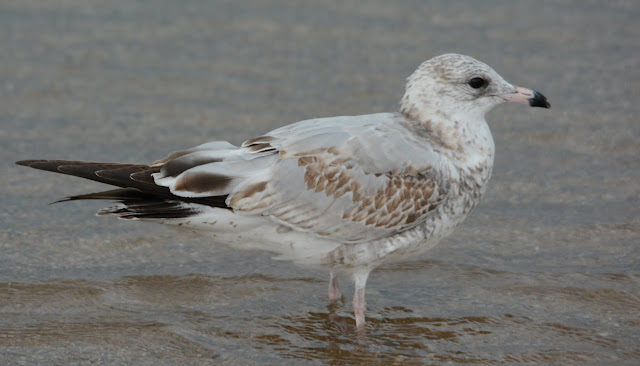 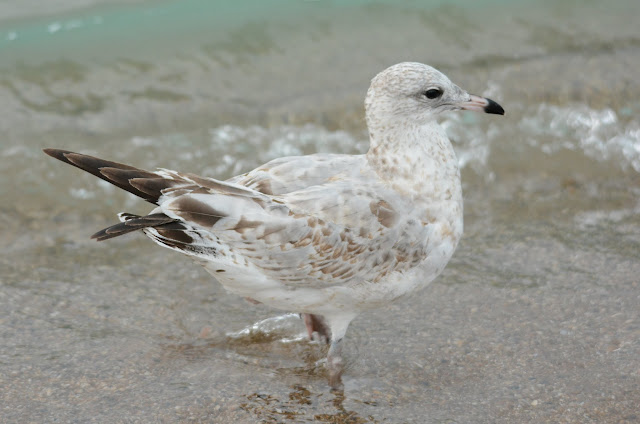 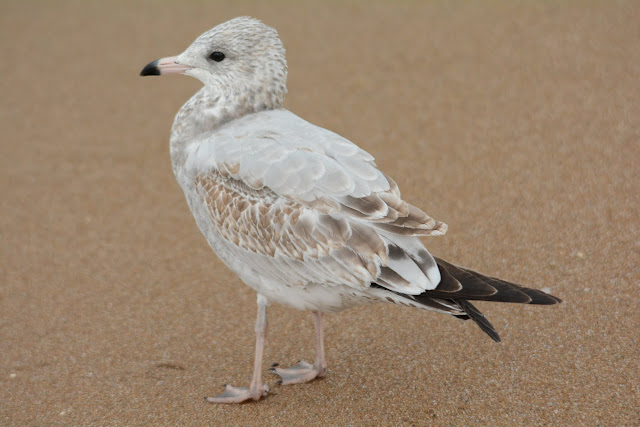 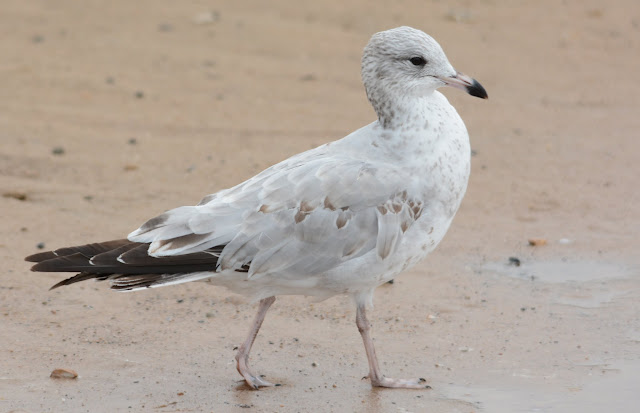 The first three show similar patterns to the August bird with a bit more gray, while the latter two show a replaced tertial with isolated large brown spots. These individuals that have one or two replaced tertials show an asymmetric molt, and I've yet to see one with the same tertial replaced on the opposite wing. This suggests the new tertial may have readily replaced a weak juvenile feather that fell out soon after the bird fledged.

The variation here is great - so great that it becomes difficult to compartmentalize in categories that are very specific. What could be said, though, is that these HY, 2nd generation tertials, are better thought of as formative feathers (post juvenile), and if replaced yet again in the first plumage cycle (early Spring, for instance), they'd naturally be thought of as 1st alternate.

Maybe looking at 2nd cycles can help shed some light on tertials in 1st cycle birds. There are 2nd cycle Ring-billeds that are currently showing "new" gray tertial ends with brown centers near the bases - exactly the opposite of what we see in the first 4 birds in this post:

The tertials on this bird aren't juvenile. Instead, at the time the feathers were activated, they began with an adult-like gray color and then regressed to brown near the bases. The tips to the tertials appear to have grown in the same molt that produced the lowest scapular (with white tip) and the newer median coverts (PB2?).

One can speculate as to why this pattern of half-gray/half-brown in HY Ring-billeds exists (and vice versa in 2nd cycles). I could only defer to Peter Pyle, who explained to me recently what might be going on:

"In gulls, post-juvenile feathers become more advanced looking with time as they are replaced in Fall through early Spring, and then become more juvenile-like again when replaced in late spring through summer during the second prebasic molt (more so in larger white-headed gulls than in RBGU). I'm supposing these poorly known "molt plumage interactions" and the hormones controlling them can act during the prejuvenile molt as well. The abrupt break between the pale bases and juvenile-patterned tips could indicate that there was a rapid hormonal switch when these tertials were at that stage of growth".

I believe tertial replacement in my local 1st cycle Ring-billeds is relatively common, both via preformative and/or prealternate molts. With a little more research, we'll soon be able to broaden our understanding of this feather track with other various populations.
at September 05, 2015
Email ThisBlogThis!Share to TwitterShare to FacebookShare to Pinterest
Newer Post Older Post Home