A quick note on the nature of feathers and their ability to realign themselves. Consider the "rift" on the 9th primary on the left wing below:

Just a few minutes later and the flaw has been removed:

Another example of a juvenile Kumlien's Gull with the same rifts: 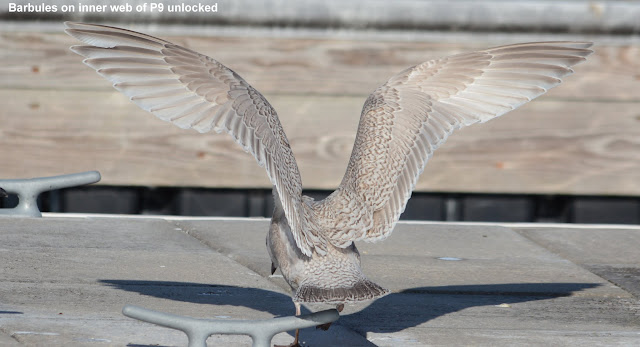 Here's this same individual maintaining and "zipping" up these feathers by gentle preening:

So how does this "interlocking" work? From Sibley's guide to Bird Life and Behavior: "A series of parallel barbs, which together form a flat vane (or web) on each side of the shaft, branch away from the shaft. From each of these barbs many tiny barbules branch off, with a system of hooks and ridges that holds the barbs together" (Sibley 2001).

It's the small, nearly microscopic, hooks that form a sophisticated mechanism that lock together and "zip" the barbs together. The hooks on the distal barbules clasp and lock on to the flanges on the proximal barbules. This diagram depicts these ideas that can't be observed with the naked eye:

You can try locking these barbules together on recently dropped feathers. As an experiment, I recently collected several "fresh" primary feathers from Herring and Ring-billed Gulls. I pulled apart several parts of the feathers and easily "re-zipped" them by gently placing a finger under and above the feather and combing outwards with a soft pinch. It worked perfectly. I then stored these feathers in my garage for 3 months under dry conditions and tried again just a few days ago. After 3 months the barbs would not lock together seamlessly. I have to wonder if the keratin on these feathers has dried out to the point where the barbs can no longer "stick" together. Further, how much does this have to do with preen oil and its role in moisturizing and "gluing" barbules together?
at December 26, 2015
Email ThisBlogThis!Share to TwitterShare to FacebookShare to Pinterest
Newer Post Older Post Home