What's That On Your Bill?

June is here and many adult gulls are busy tending to their newly hatched young. These semi-precocial fuzzballs can be unrelenting when ordering up a morsel. 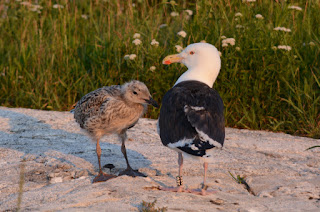 Appledore Island. Maine. July.
The gonydeal spot is thought to have evolved as a prodding stimulus to help chicks focus their solicitation when begging for food (Tinbergen 1950). In effect, chicks nudge or peck their parents which usually results in food being regurgitated from the crop, or proventriculus. Bill pecking may also serve as a cue for adults to vary their diet accordingly (note that some females peck at the male's bill, although near the bill-base and gape instead of the tip). Interestingly, the tip of the bill is suspected of being more sensitive than any other part of the bill (Ferns & Smith 2009).

Gonys spots are only found on some of the so-called large white-headed gulls (for example, Herring Gull, Glaucous Gull and the like). Recent gull phylogonies show this group of gulls is youngest. The medium and small-sized gulls don't show gonys spots (for example, Ring-billed, Mew Gull and all of the hooded gulls).


Not All Gonys Spots Are Created Equal

There's no apparent size differences in adult gonys' spots based on sex or age, intraspecifically. There is, however, an appreciable difference in size from species to species.

Mew Gulls (particularly Asian Kamchatka Gulls) often show pseudo gonys spots. These are nothing more than an insignificant smudge of the "right" mixture of colors (perhaps just a result of yellow, black and gray expressing themselves simultaneously?).


In nonbreeding condition, Thayer's Gulls often show an orange-red gonys spot. The accompanying "saddle spot" on the upper mandible is a bill pattern that has many a time assisted me in picking out this species.

A classic California Gull in non-breeding condition showing its famous red/black bill pattern. The black coloration vanishes in the breeding season when hormones are raging.


An individual that's far from ready to breed, this advanced 2nd summer Herring Gull (molting into 3rd basic) is beginning to show a red gonys spot.

I'm sure you're asking yourself the best question one can ask at this point, "Why do some gull taxa have gonys spots, and others not?". Don't the chicks of other species need to prod their parents to encourage feeding? Yes, but perhaps they achieve this in a similar way.


A number of species that lack a gonys spot still show some type of marking or bi-coloration near the bill tip. The young of Sabine's Gulls reportedly peck at the divide between black and yellow on their parent's bills (BNA 2015) and Ring-billed Gull chicks readily aim for the obvious black subterminal band on adults (pers obs.) These contrasting patterns are all believed to serve a similar purpose to that of the red gonys spot. 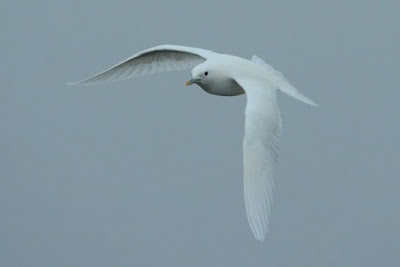 Adult Ivory Gull with a standard grayish bill and bright yellow tip. Such bill patterns have multi-purposes. In addition to stimulating begging chicks, the patterns lure aquatic prey and also serve as fitness indicators in selection. 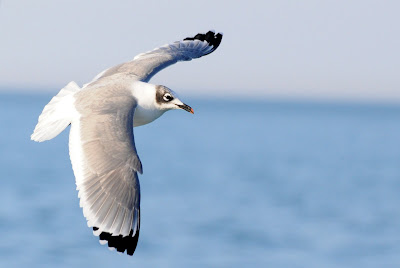 Note the bright red tip on this adult type Franklin's Gull. Most fascinating, chicks of this species (between the ages of 4 hours and 4.5 days old) responded much more readily to red colored cardboard bills (attached to gull head models) than they did to other colors (Collias and Collias 1957). 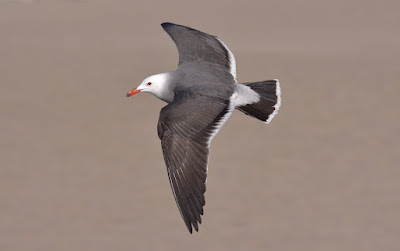 The pattern is reversed on this adult Heermann's Gull - a black tip that contrasts sharply with an all red bill.

To Feed Or Not To Feed

Still, there are curious questions regarding bill patterns in gulls. What about species with entirely uniform colored bills - kittiwakes for instance? Adults in the genus Rissa have all-yellow bills with not the slightest trace of any bi-coloration. These steep cliff nesters are sufficiently different than most other gulls. I've always found it interesting that hatch year kittiwakes don't have cryptic brown juvenile feathers.  Further, 1st cycle Red-legged Kittiwakes are the only juvenile gulls we know of that are without any hint of a tail band. Oddly, young kittiwakes don't commonly run off and abandon the nest when threatened, as do the chicks of larger gull species (Cullen 1957). Kittiwakes are known to have smaller clutches (~98% of Red-legged Kittiwakes produce a single egg clutch. Black-legged Kittiwakes average 2 egg clutches) and they typically feed their chicks throat-to-mouth, similar to true seabirds.


Ferns & Smith have presented convincing evidence that the larger gulls have proportionally small eggs, resulting in relatively small chicks at the time of hatching. Therefore, the young have inherited a great need to grow and develop quickly in the few precious days after hatching. Beside hatching with cryptic-colored plumes, the red gonys spot is an additional vehicle that large gulls have evolved in order to bolster these ambitious fledglings.

Howell, SNG & Dunn, J. 2007. Peterson Reference Guide to the Gulls of the Americas.