After scoring for a second time with the Port Washington Black-legged Kittiwake, I decided to try my luck at Pugh Marina in Racine County WI. It was a wise decision. Let me start by saying the viewing conditions at this location are for the most part above average. Just like many other sites that harbor good numbers of wintering gulls, the lake should be iced-in and the birds will congregrate close to shore. About two-thirds of the gulls were within 100 yards and the rest were nestled on the break-wall about 300 yards away.
Immediately after getting out of my car I spotted a 1st cycle Iceland Gull (L.g. kumlieni) with the naked eye. Wisconsin birder Rick Fare was already watching the gulls when I arrived. I got him on the ICGU and what came out of my mouth next was completely unexpected. I said, "I think I have a Glaucous-winged Gull". I also apologized for showing up and abruptly calling a bird like GWGU within my first two minutes of arriving. We watched the bird for a few minutes and both of us agreed it was the size of an American Herring Gull or even bigger.

The bird is seemingly "okay" at first glance for a Glaucous-winged Gull but there are some particulars that become troubling after taking a close look. First, the bill is not much different than the AMHE to its left. That is, the bill is not massive and it lacks any noticable angle to the gonys. Yes, this may be overlooked in females and younger birds and although the bird does carry that bottom-heavy look of a Glaucous-winged, the wing pattern is not right for a pure GWGU. Here is a shot of the spread wing. 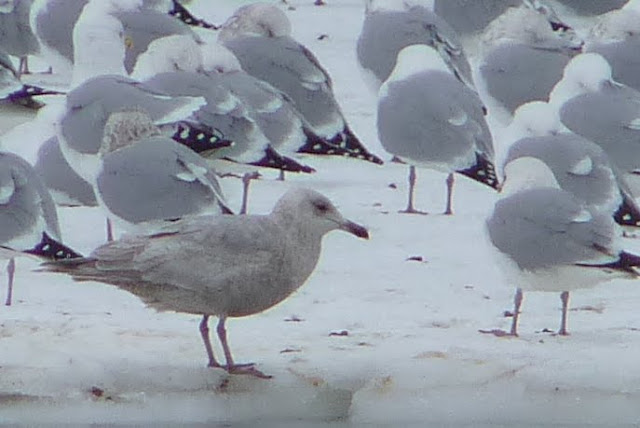 One birder, who I admire and look up to in many ways, told me to not be so critical and to accept the bird as a Glaucous-winged. I would have loved for this bird to be a pure GWGU but the fact of the matter is that American Herring and Glaucous-winged Gull commonly hybridize. Individuals like this can be easily found in the Anchorage Alaska region in summer and early Fall.
While resting, the bird clearly shows wingtips that are darker than the tertials and the rest of the body -- another minus for pure Glaucous-winged! 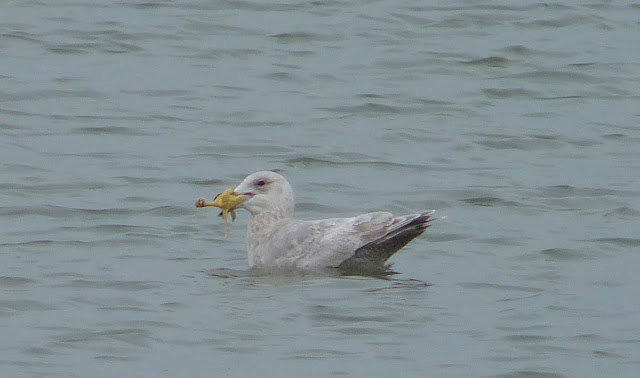 What I have learned, first-hand, is that this hybrid combination can be mistook for an "oversized" Thayer's Gull. This is mainly due to the the "venetian blind" effect on the outter primaries on the spread wing. One thing to note is that the inner-webs on the outter-primaries are a bit paler on Thayer's. The contrast between the inner-webs and outter-webs should be more exaggerated for a Thayer's Gull. Also, it would be very hard to make the case for Thayer's seeing that this bird's body size matched/exceeded all of the American Herrings around it. Although there is overlap between female Herrings and male Thayer's, there weren't any gulls on the ice that this individual was smaller than.
Note the inner-webs on the outter primaries. This is usually a reliable mark (until you run into the odd Thayer's that has an unusual amount of dark coloring spill into the inner-webs, see Howell p. 271, plate 36.39). The dark is restricted to the outter-web on Thayer's but usually blends into the inner-web on the hybrid. If any confusion does arise from the wing pattern, then body size, bill shape/size and the inner-primaries should help in making a final ID. CLICK ON PHOTOS.

2nd cycle Thayer's above. The presumed 2nd cycle GWGU X American Herring below.
Both birds were photographed in Feb. 2010 along Lake Michigan.
at March 08, 2010
Email ThisBlogThis!Share to TwitterShare to FacebookShare to Pinterest