I guess a good name would be Laugh-ring Gull. For the last seven years, a presumed Laughing X Ring-billed Gull has entertained birders on Chicago's SE side. Walter Marcisz has observed this bird every year since 2004 and has usually found it hanging around with a bunch of Ring-billeds at the local KFC. I, on a whim, got my 3 year-old twins in the car on 25 March 2010 and tried my luck. The first group of gulls we encountered held this individual. We immediately pulled into the Jewel parking lot where this bird was resting. 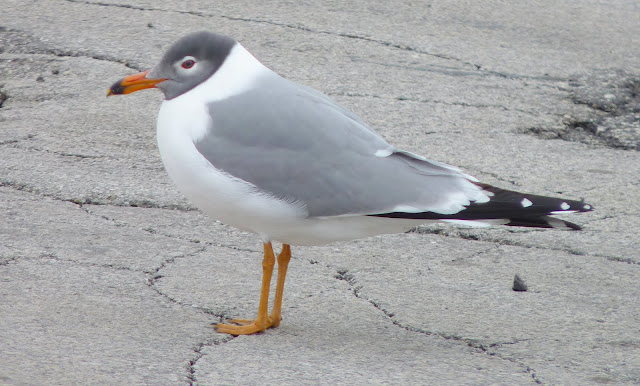 Dorsally, this individual is a bit darker than a Ring-billed but paler than a Laughing Gull. Proportionally, it seems long-winged compared to the other Ring-billeds. The hood, especially around the bill and face, looks faded and I don’t think this is a function of the bird still molting. The eye is completely encircled by white feathers. The color of the iris is darker than the average adult RBGU but paler than an adult LAGU. Leg color is more of an orange than the yellow of RBGU. The bill color is also more of an orange and not the reddish color seen on a pure LAGU. All colors on this bird -- leg color, iris color and upperparts -- are intermediate between both parent species. 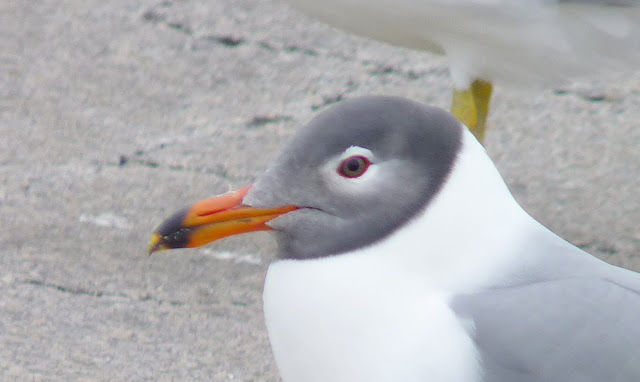 For what it's worth, I heard this bird vocalize last year at Calumet Park and it sounded like a nasaly Ring-billed. Would it be reasonable to say that this individual was raised in a Ring-billed colony rather than a Laughing Gull colony?

Howell and Dunn include a nice photograph of this hybrid combination on p. 14, photographed in Two Rivers, WI on 16 March 2003. It sure looks a lot like this individual. Seeing that the smaller Ring-billed colonies along the Great Lakes form one mega-colony that is reassembled with various populations every year, it wouldn't be hard to believe that this bird (or its siblings) has wandered along Lake Michigan. Based on Walter's observations, he does not have any evidence of this bird having ever been paired up. With that said, perhaps this individual freely wanders the western coast of Lake Michigan in the breeding season. Bruce Heimer photographed a similar individual at State Line Beach on 18 July 2009; It too had a faded hood appearance.

Howell and Dunn use the word "intermediate" to describe this hybrid combination. That is, most of its characters are a compromise of both parent species. I couldn't agree more! 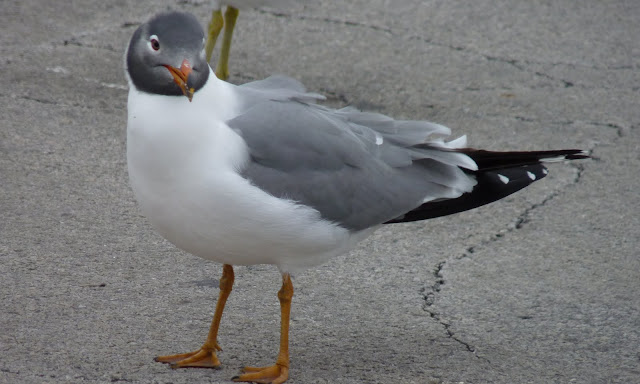 at March 28, 2010
Email ThisBlogThis!Share to TwitterShare to FacebookShare to Pinterest