Wes Serafin and I went down to Carlyle yesterday (22 Sept 2012) for the yearly IOS pelagic trip. The possibility of finding a phalarope, a jaeger or an "interesting" gull is just too exciting to pass up!

Captain McMullen with his group. The guy with the orange cap was a stray they picked up in the marina. 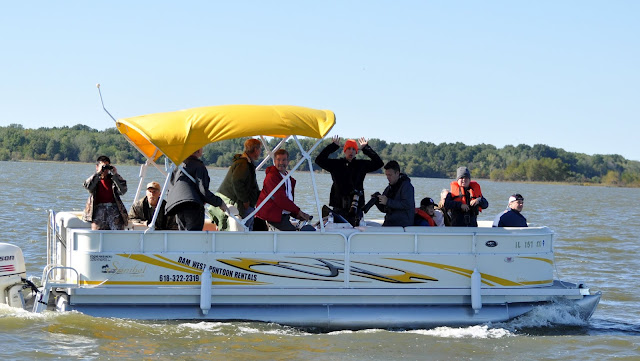 But as the saying goes, you can't see all the birds all the time. We got decent looks at a Red-necked Phalarope, no jaegers and this was my first time getting "skunked" on Sabine's for this trip. The writing was on the wall...with all of the Sabine's being seen on Lake Ontario, Lake Erie, Lake Michigan and other inland places, it seems there were none left for Carlyle this year (I hope they find one today to prove me wrong).

The Great Black-backed is a very good sighting this far inland but even more so considering the date. It was first found here on 01 September 2012 by Dan Kassebaum and Dan Williams.

An unusual combination for September, in Illinios, is to see both black-backeds together:
﻿
Having found a first Carroll County record Sabine's Gull on the Mississippi River just 6 days ago sort of alleviates the pain of dipping on the boat ride. Nonetheless, 7 species of gull is now my Illinois day high for September. The other three species we saw were expected: Bonaparte's, Ring-billed and American Herring.