This was a rather hefty one, stacking up nicely to the nearby Herrings:

This is the second year in a row that I find a Cali Gull here. Last year's bird was a 1st cycle in late October. This is also my second CAGU in the area in two weeks!! I really do think the best window for sighting this species on southern Lake Michigan may be late October-early November (but more data are needed).

Another highlight was this rather dark Kumlien's Iceland Gull (stage 4-5) that looked intermediate at times (depending on the lighting):
The thought of this being an Iceland bothers some people (especially the more west one travels), but the wingtip coloration and pattern is better for KUGU. These photos do the bird much more justice:

This open-wing shot is a bit blown out (overexposed), but the wingtip has an unmarked P5 and pigmentation restricted mainly to the outer web of the outer primaries. 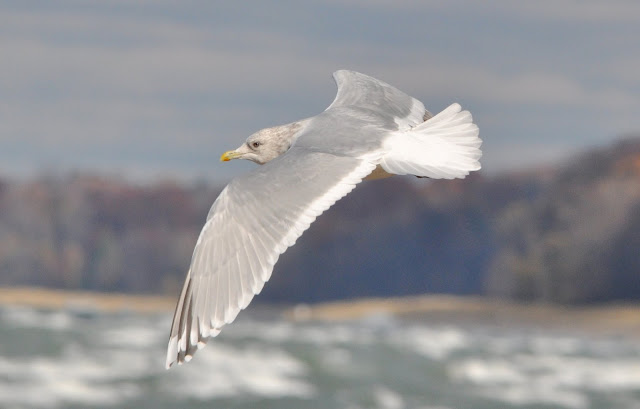 It was a relatively small gull with a nice helmet-head - a very social gull too, coming in just as frequently as the Ring-billeds!
at November 11, 2013
Email ThisBlogThis!Share to TwitterShare to FacebookShare to Pinterest
Newer Post Older Post Home