The island is home to nearly 850 pairs of HERGs and about 500 pairs of GBBGs. Here's a neat video produced by the Cornell Lab of Ornithology showing how these birds carve out and maintain territories on this relatively small spit of land.

You'll recall this is the same site where Dr. Ellis and her colleagues found the now infamous male Lesser Black-backed Gull (Green F05) nesting with an adult Herring in 2007 (and then subsequently in 2008 and 2009). Thereafter, I began referring to the putative hybrids of these two species as "Appledore Gulls". Much remains to be learned about identifying this presumably increasing hybrid in North America. The hybrid chicks - some banded - have been documented with photographs along the Atlantic seaboard, all the way down to Florida and Alabama.

As I arrived on the island I was met by gull connoisseur, Bill Clark. Bill has devoted much time and energy with these birds, and he's been instrumental with the program's on-going success. As we began walking away from the dock, I immediately sensed just how comfortable the gulls are here - some apparently having nested and now caring for their young right along the walking paths leading to the lab.


After a short tour and a generous lunch, I was cautioned about the notorious Appledore Clover (poison ivy) and our chick-banding commenced. I was drawn by how fast this team of young students, led by Cornell's Dr. David Bonter, worked. They had already banded some 40+ chicks that morning and were now going for round 2, which resulted in another 32 chicks being banded.

The chicks - almost all still flightless - were captured by hand after usually putting on a short chase through the rocky terrain. Brought back to an informal banding station in a cloth bag, they were fitted with a federal band and a field-readable band on separate legs. Next, a blood sample is taken from the underwing, a preen-gland feather sample is cut, and a wing measurement is noted. Finally, the chick's weight was recorded along with any pertinent notes such as "Chick A, B or C", with any sibling relations noted.

The parents, although mildly stressed and agitated, seem to anticipate the return of their young. This pair flew in and sat just a few feet beside us, watching as we banded their chicks. 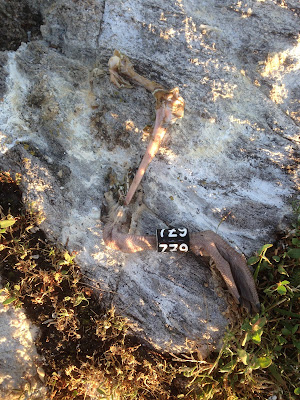 Nature governs as it will.

As day 1 came to its end, we gathered outside on the front steps and took in a mesmerizing sunset over the mainland. Some respite time was much deserved as we'd awake the next morning at sunrise and repeat the banding circus all over again - I was stoked!

You might remember that last spring I found one of Appledore's young Great Black-backeds some 1,000 miles away in Whiting, Indiana on southern Lake Michigan. Earlier this year, I resighted Green F05 (Pierre) in Daytona Beach Shores, Florida. Exciting stuff! You too can help track these gulls by taking a little time to sort through your local gull flocks!

The large field-readable bands have made it easy for anyone to contribute to this project, and it's this message that I hope my reader takes from this post. Color bands are gaining much popularity as more gull banders in North America begin to utilize them. You can read more about the Gulls of Appledore Island and the ongoing research, here. You'll find information on where to report a banded gull should you encounter one. Every resight helps strengthen the vast database of information that's being accumulated. There's much more to be learned about this avian family that's so commonplace on our continent.

Thanks to Julie Ellis for extending the invitation and Bill Clark for entertaining all of my questions and hosting me. I'd also like to thank David Bonter for his patience and cordiality, and allowing me to tag along and help band some of this season's chicks.
at July 21, 2015
Email ThisBlogThis!Share to TwitterShare to FacebookShare to Pinterest