Being the opportunistic feeders that they are, large gulls prey on just about anything on the food chain that doesn't threaten them, including passerines. On Saturday, I and a large congregation of birders observed Ring-billed Gulls methodically hunting incoming migrant song-birds at Miller Beach along the southern rim of Lake Michigan.

The gulls patiently sit on the shoreline and await their subjects coming in off of the lake. 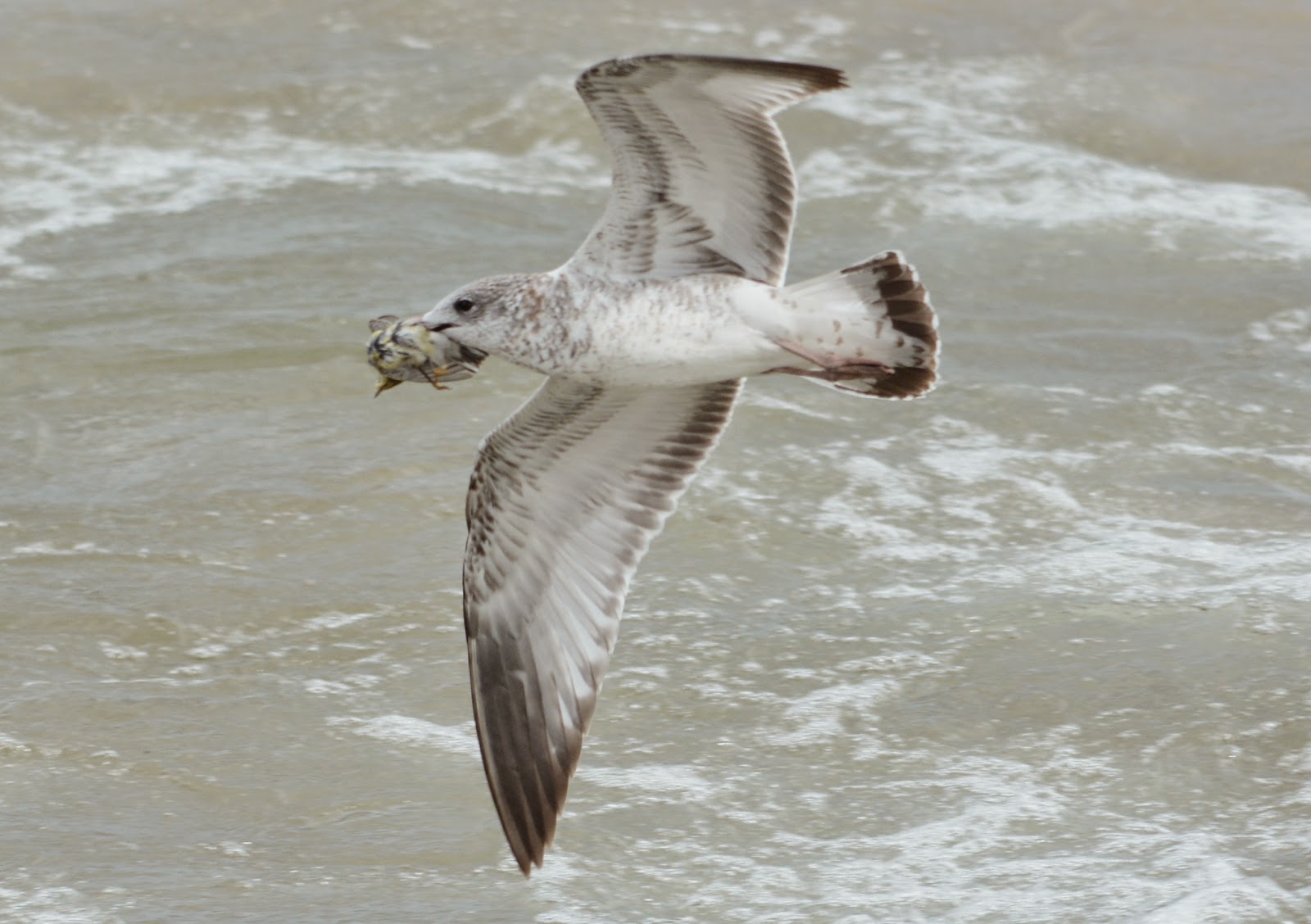 The assumption here is that the passerines migrate over the lake and find themselves stranded over the water as they work their way south. With no where to take cover...well, you know where this is going...
Twice I watched distant warblers flutter in to shore like exhausted butterflies, while keeping a close eye on them and the gulls. The death-sentence was issued as soon as the Ring-billeds would detect the passerine. The gulls would fly out over the water and meet the incoming migrant. Most impressive is how swiftly the Ring-billeds catch these birds in mid-air with their bills.

Many people have tried guessing the ID of the warbler above with no success. Most votes were for Yellow-throated Warbler, Blackburnian or Common Yellow-throat, but there was also the dreaded suggestion that it may be a Kirtland's - as if gulls need another reason to be resented.

Herrings commonly kleptoparasitize Ring-billeds in hopes of them dropping their prey, and it was no different during Saturday's lakewatch. A few of us witnessed a juvenile Herring harass a Ring-billed until it dropped an American Redstart from its bill - the Herring quickly swallowed the entire redstart with little effort. But Herrings weren't the only ones hunting on this day. We also watched a Long-tailed Jaeger with a passerine in its bill that it had retrieved along the beach to the west of us. It struggled with a Parastic Jaeger, apparently for this same song-bird, but both jaegers were subsequently chased off the beach by a Peregrine Falcon. We couldn't determine whether the jaegers came to shore to steal the passerine from a gull, or if they themselves caught the song-bird. 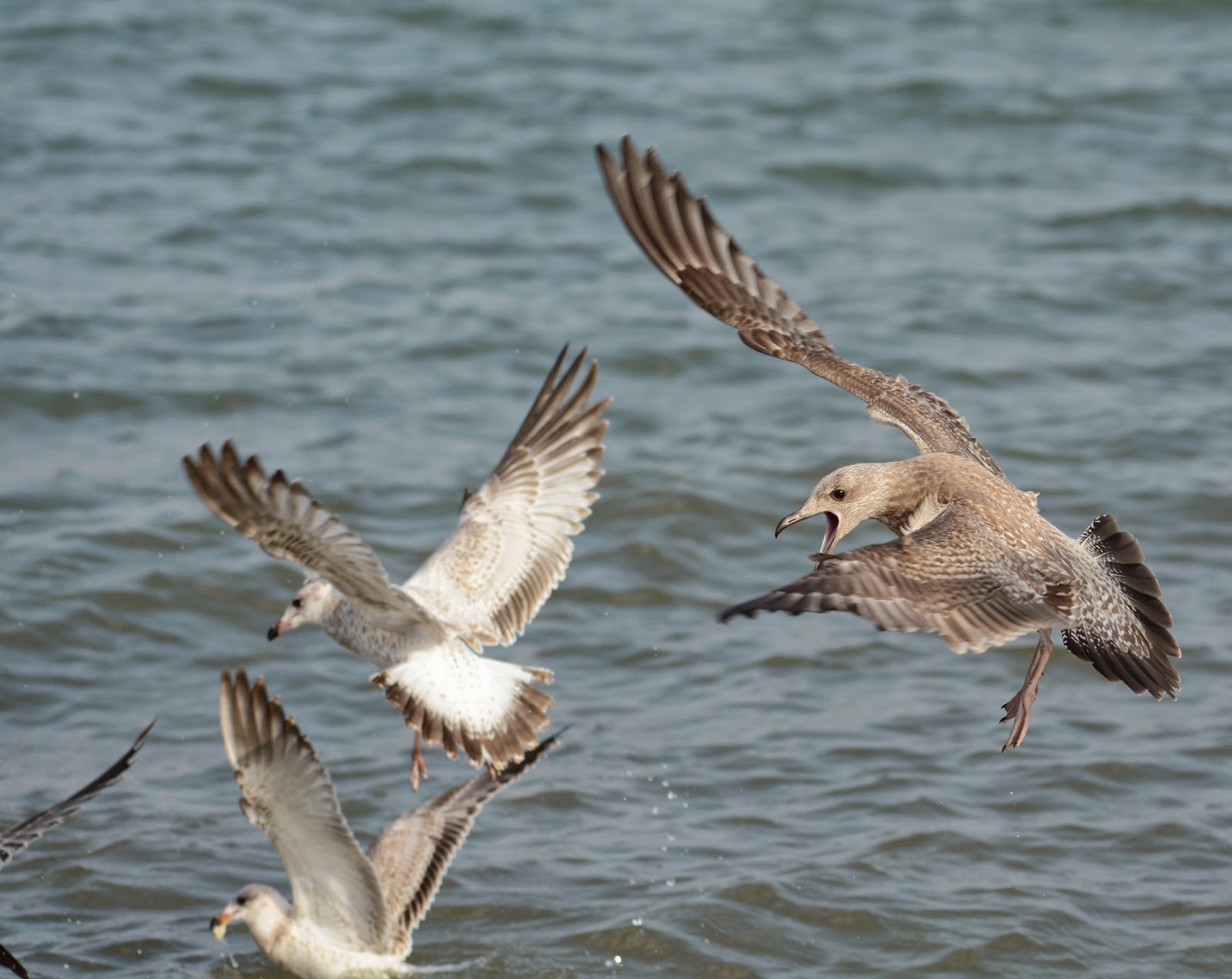 There can be no question that gulls are quite predatory and it certainly isn't the first time we've heard of such behavior of them taking song-birds. Other observers have reported similar occurrences along the Great Lakes and beyond.

Charles Sontag informed me yesterday that he has first-hand experience with gulls regularly taking song-birds in agricultural fields in Wisconsin. The common thought is that gulls are out in these fields feeding on worms and insects, and although this may be what they're predominately feeding on, evidently, they don't pass up the chance to take small passerines.

Finally, here's a fine set of photos  by Cory DeStein that documents California Gulls hunting Cliff Swallows in Montana! This last example is of particular importance because swallows are about as agile as it gets in the avian world. Can California Gulls keep up with swallows in flight?? I've yet to see a gull attempt to go for a swallow over the large open waters of Lake Michigan. The Montana record doesn't demonstrate otherwise, but rather, it shows how gulls can become skilled at calculating an ambush.