Rebecca Sher from Sheboygan County Audubon got in touch last weekend to tell me about the growing number of gulls in Port Washington. We decided a gull day was in order and quickly put together another winter workshop.


We held the indoor segment at the local library, which to my surprise, attracted around 40 participants. We then headed out to the harbor where we found upward of 5000 gulls feeding on large quantities of gizzard shad.

We found an impressive assortment of Iceland Gulls. Going through my photos, I can make out 27 distinct individuals (14 thayeri, 11 kumlieni, 2 thayeri-kumlieni). More impressive was the variety of intermediate ages, especially 2nd and 3rd cycles.

And as the light began to fade, we got bombarded with another wave of adult Kumlien's: 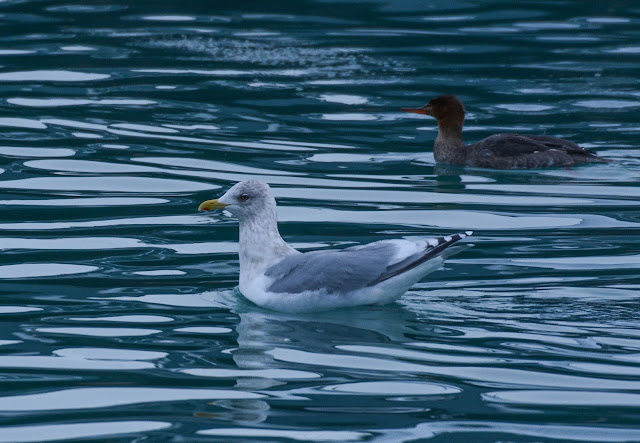 We also had ~12 Glaucous Gulls with about half adults and half 1st/2nd cycle types.


We had ~ 8 Great Black-backeds and zero luck turning one into "the" Slaty-backed Gull. Lesser Black-backeds were MIA with only 3 birds found (adult and two 1st cycles).

The Wisconsin lakefront is a vast playground filled with great gulls waiting to be found and enjoyed by birders. A big thanks to Rebecca and Sheboygan County Audubon Society for hosting another great outing!
at February 11, 2018
Email ThisBlogThis!Share to TwitterShare to FacebookShare to Pinterest
Newer Post Older Post Home