It's said that the Chicago Lakefront CBC is the ONLY count in the ABA area that is still held on the actual day of its namesake - Christmas Day. For the second year in a row, I joined Joel Greenberg and company, starting at the Museum of Science and Industry and working our way north to the Museum Campus near Belmont Harbor.

The best variety of gulls was at La Rabida Hospital where Ethan and Aaron Gyllenhall picked out distant Great Black-backed, Glaucous and Lesser Black-backed Gulls. These birds were leaving the water intake crib offshore early in the morning and flying south towards the Calumet Park/Hammond Marina area. We also had an adult-type LBBG fly in close over the harbor.

Expectations were high for the Museum Campus, but the gulls didn't oblige as there was only a small pocket of open water, and perhaps too many birders and tourists standing around for them to be comfortable. We did, though, check-off a much needed daybird: Thayer's Gull. 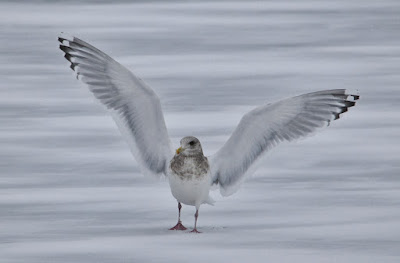