A very exciting part of gull-watching for me is finding banded individuals and retreiving their histories from the Bird Banding Lab. I've reported quite a few birds in the last two years, and have had so many conversations on the phone with the lab, that some of the employees there have come to personally know me as the "gull guy". What a legacy.

Anyway, here's another one to add to the collection:

I entered this bird into the system the same day of the sighting, but just heard back from the lab yesterday: 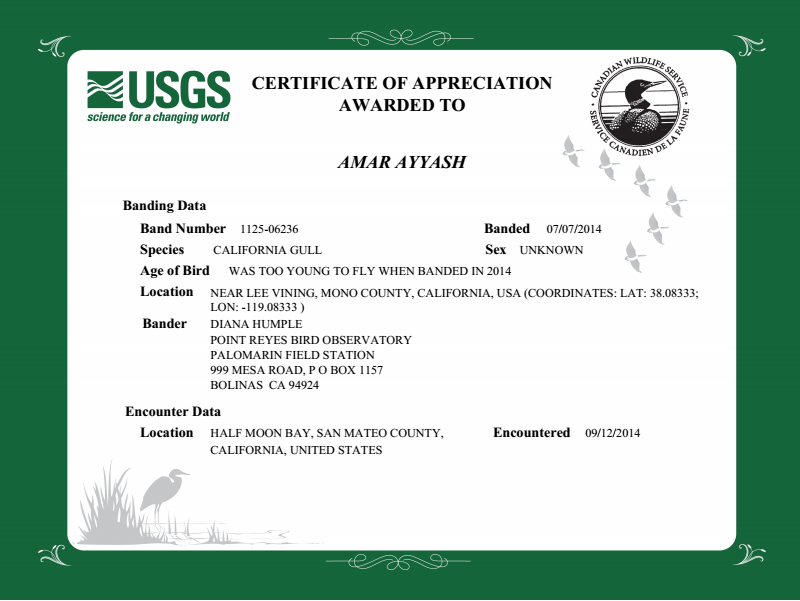 It's not unusual for the database to be missing data on juveniles, particularly because of banders who haven't submitted their logs (it's a lot of data). The other reason one might get a delayed response from the lab is if the band is very old and predates some of the electronic records (rarely a problem).

In any case, back to the juvenile California Gull. It originates from Mono Lake - one of the biggest California Gull colonies in the United States. Notice the bird has retained a mostly black bill in mid-September, and there are no post-juvenile scapulars grown in yet:

Compare the juvenile above to this hatch year CAGU:

Is it likely this individual fledged well before the subject bird? Surely it must have taken some time to acquire all of these post-juvenile scaps (PF/PA1?). A similar thing occurs with our early Fall Ring-billeds here on Lake Michigan. A cohort of hatch year RBGUs on the same beach can have scapulars that range from entirely juvenile to almost all adult-like gray. I've for some time now believed they have to have different hatch/fledge dates.

Off to the next one.
at December 04, 2014
Email ThisBlogThis!Share to TwitterShare to FacebookShare to Pinterest