Ethan Gyllenhaal and I found this 2nd cycle Kumlien's Iceland Gull in northwestern Lake County, Illinois, near the Countryside Landfill on Tuesday:

Amazingly -- well maybe not amazingly, but interestingly -- two days later on Christmas Day, we observed it again, but this time some 45 miles to the southeast on the Chicago lakefront with our CBC group:


It put on a great show for all of the Lakefront CBC counters at the Museum Campus, and at one point, Kelly McKay remarked how the looks we were getting "just can't get any better". I replied that we had a bird two days prior that can "literally" be this bird's twin. I didn't think much more about it for the rest of the day.

Sure enough though, after thoroughly checking both sets of photos, I was able to confirm it's the same bird based on a few plumage details - another neat data point in understanding the movements of our gulls!

My best guess for why this bird would now be on the lakefront - and not at the landfill - is rather simple: perhaps it found little food at the landfill as fresh shipments of waste aren't brought in on days it's closed (i.e., Christmas). It's not unusual for many gulls to abandon landfill sites on days there aren't free meals being served. I'm sure it as well as many of our wintering gulls resort to working the lakefront and other bodies of water on holidays and Sundays.

Addition:
I refound this same gull on the Calumet River on 08 February 2015 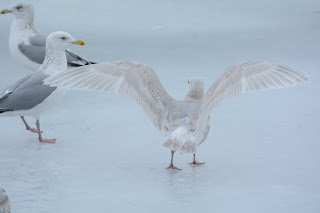 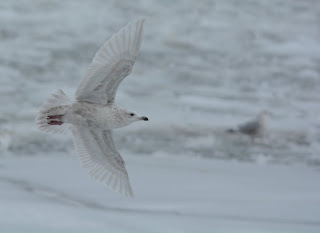